Hot on the heels of our Growing up in Stoke’s record shops post, friend of Strand Records, Jayne Taylor, talks about hearing vinyl for the first time, buying records in Stoke-on-Trent and working for Replay Records . . .

My first encounter with vinyl was terrifying! I must have been around five or six years of age. I was idly flicking through my dad’s record collection when I encountered a Leo Sayer vinyl . . . I remember being absolutely traumatised by the cover . . . it would appear that poor little Leo had sat on a drawing pin judging by the pained expression on his face and as a result he’d been catapulted 50 feet in the air. (Endless Flight . . . Google it . . . I dare you).  Editor’s note: no need Jayne, here it is for you to enjoy all over again!

I put it on the turntable of our Alba radiogram, which was basically  the size of an Hillman Imp, and dropped the needle on the record. To my utter joy and delight, I discovered that Leo sounded just like my then heroes, The Smurfs . . . my joy however was extremely short-lived as my dad thundered into the room and told me I was playing his musical hero, Leo on the wrong speed and with the flick of a switch my blue and white heroes had been transformed into something which I told my dad, “sounded a bit rubbish” . . . with utter indignation he snatched the record off the turntable and told me never to listen to Leo again . . . not that there was much danger of that!

The months rolled by and, aged 7, I decided The Smurfs were for kids and fuelled by my older brother’s love of all things Punk and New Wave, I embarked upon my lifelong irrevocable musical obsession. Age ten, I bought my first ever single “The Model” by the peerless Kraftwerk . . . I dashed home to play it, not before staking my claim on it by writing my name on the back in biro like we all did way back when . . . why did we do that? It still hurts when I look at it!

Anyway, hundreds of trips to Woolies to peruse and obsess over the Top 75 singles racks followed and fast forward to the Autumn of 1990 when I landed myself the absolute dream job of Sales Assistant at Replay Records. On my first day my then boss probably wondered what the hell she’d landed herself with when she found me nose deep in a box of fresh vinyls inhaling deeply like some kind of plastic pervert but the stuff is pure magic right? Don’t look at me like that! 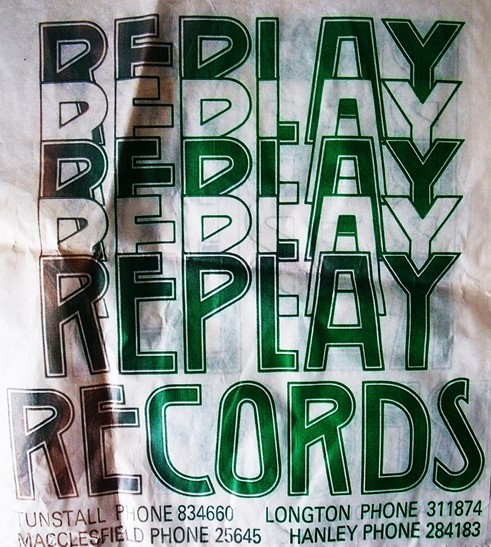 Anyway, moving swiftly on . . . head honcho Bryan, Replay’s founder, CEO and all round smashing fella had four shops when I began working there. Longton, Hanley, Macclesfield and finally the nerve centre of the operation, Tunstall, which stood proud on the High Street for many years. I worked at three of the four shops spending most of my time at the small but perfectly formed Hanley branch. Hanley at that period in time was awash with record shops, there was Mike Lloyd Music, Lotus, Our Price, Discs and of course the chain stores such as Woolies and WH Smith that had huge record departments (was it just me or were all the CDs and vinyls from Woolies in really poor nick like they’d been stored in sandpaper sleeves or something?). What we lacked in size we made up for with our boundless enthusiasm, passion and dedication to providing a first rate personal customer service and we did a stunning trade with the, “If I hum it/sing it to you, can you tell me what it is and sell it to me?” peeps, which was always great fun.

We sold mainly chart stuff but had a good selection of most genres . . . O.K, maybe we fell a bit short with the Pirate Metal,Wizard Rock and German Reggae but we could have ordered it in for you. We stocked the legendary Top 75 hit parade back when the charts were a big deal and you could still own a beautiful piece of plastic for mere pocket money but the humble vinyl 45 was by now facing stiff competition from both the CD single and the cassette single. This was way before the internet so we did a huge trade in ordering stuff in for people . . . we had a huge red book, a rather impressive tome which closely resembled the one grasped by Eamonn Andrews on This Is Your Life. It was the absolute bible of all things music and contained the catalogue number of every single UK music release since the charts began in 1952. This is where you’d have to source your catalogue numbers for the customer orders . . . it all seems so dated now. The tome was so heavy you’d pretty much risk some sort of wrist injury each time you lugged it up onto the counter and of course you’d have to have smaller add on versions every few months containing all the latest releases.

Jason, my then boss, loved his techno and rave choons and we did a steady trade selling 12 inches to the young ravers who’d park up their VW Golf GTIs and XR3is outside the shop wanting their vinyl fix . . . happy, happy days.

It’s hard to believe but by Autumn 1991 vinyl sales of albums had been completely eclipsed by CDs and cassettes and we actually stopped selling vinyl albums altogether. A sad day indeed but fear not vinyl, you will rise again like a phoenix from the ashes . . . and you did!

Always a sucker for a gimmick me, and we sold them by the bucket load. Who remembers the 10 inch single? 3 inch mini CD single? CD singles in tins? Vinyl of all colours of the rainbow, limited editions, numbered editions, novelty packaging of every description, singles in plastic sleeves full of glitter and the one that sticks in my mind was the Divinyls, “I Touch Myself“. A CD single containing X-rated photos apparently . . . sold like hot cakes that one!

Central to everything we did was our core of wonderful, loyal customers. People from all walks of life who would often take you into their confidence and treat you like a friend. My favourite memory was a lady that came in to buy a single because it reminded her of her dear mum who had sadly recently passed away. She asked me to play the record and as we listened she shared some of her memories with me and showed me some photos of her lovely mum. Replay was more than a record shop, it  gave a sense of community and it was a joy to be part of something so special. I moved on to the dizzy heights of the record department at WH Smiths but I will always look back at my time at Replay with fondness. Replay may be long departed but hopefully there’s a few of you out there that remember us as fondly as we remember you x 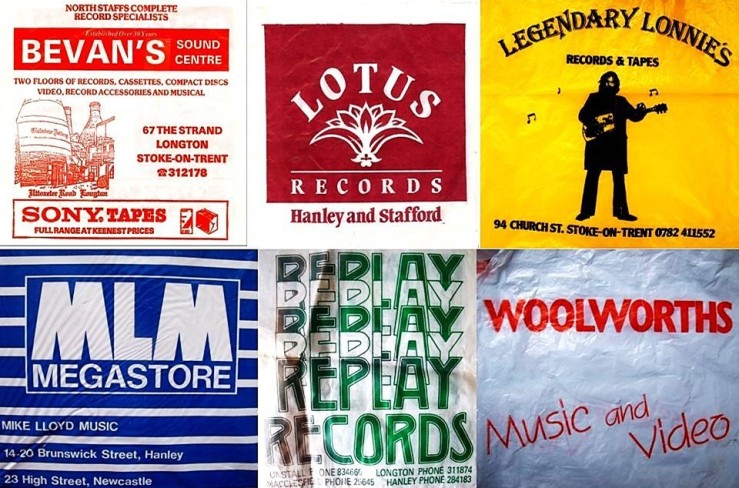 From c. 1978 or so onwards, a trip to some of the records shops of Stoke-on-Trent became a weekly activity for the boys from Strand Records. This was usually a Saturday morning jaunt although after school was an option too if you got a wriggle on before shop closing time! We flew solo at first but from 1984 we hunted in packs!

The three towns visted most often by us were Hanley, Stoke and Longton. The main shopping centre for Stoke-on-Trent is Hanley and there were some key record shops located here;

The wonderful British Record Shop Archive has entries for both Mike Lloyd Music and Lotus Records. Here’s a photo of Strand Records’ Ken outside Lotus in 1988.

Stoke town also had a Woolworths and the marvellous Legendary Lonnie’s located on Church Street (although it moved along London Road later on). Lonnie Cooke is a music legend and he once stood for the Raving Monster Loony Party in Stoke!

In Longton there was Bevan’s, which had the strongest record shop smell ever. This family business was located on the Strand (where Strand Records is situated) and they were great for stocking the entire hit parade as well as ordering records and providing a range of styluses.

In Longton’s Bennett Precinct, you found Disco 1 which later became Replay Records which later became Musique (or maybe the other way around?). You also had Tony Denson’s on Market Street which is where Strand Records’ Dave bought The Specials’ Gangsters. Of course, there was also the ubiquitous Woolworths further along Market Street.

Here is a photo of Strand Records’ Dave outside Mike Lloyd’s Megastore, Hanley in 1997.

We realise that memories fade and so there were probably other record shops that we have forgotten about. Any comments are most welcome. For example, there was a downstairs record shop in Longton on the Strand but we can’t remember the name (Editor’s note: we now know it was called Madcap Records). There were various record stalls that popped up in indoor markets too but it was all so long ago.

Here’s a couple more bag designs for Mike Lloyd Music. These were the smaller bags for 7″, CDs and tapes.

The record shop was a big part of our education, leisure time and cultural development. As music supervisor Gary Calamar states in Record store days (2010), “The record store was a place of escape. It was a library and a clubhouse”.

Boy did we seek sanctuary and learn and have fun.