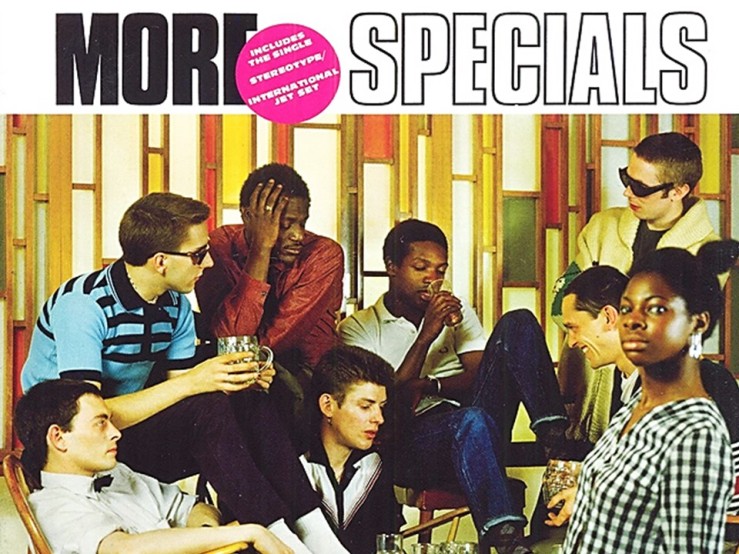 In 1979, The Specials released their all-conquering, high-octane, self-titled debut album, produced by Elvis Costello. It was a full-on SKA affair infused with punk energy. In October 1980, the follow up album MORE SPECIALS was released. This was a much more complex bag focussed on Jerry Dammers’ unique vision, with elements of muzak, lounge, jazz and bossa added to the new wave SKA mix. It’s notable that the printed pink sticker on the sleeve covers the letter E in ‘More’ thus leaving MOR (middle of the road). Subtle eh!

The album opens with a cover of Enjoy Yourself (Later Than You Think) which is pure cabaret calypso with Terry Hall declaring, … I’m Terry and I’m going to enjoy myself first!   After this show tune, comes Man At C&A which is scary nuclear dub with an amazing brass sound. Following this tale of apocalyptic doom comes the uptempo skank of the impossibly joyous sounding Hey Little Rich Girl. Smash hit Do nothing is next – a reggae-tastic stripped down album version of the string-laden single release. The vibes-driven Pearl’s Cafe is a total hoot and side 1’s closer is a cover of Rex Garvin & the Mighty Cravers’ Sock It To ‘Em J.B. – a northern soul-esque track originally from 1966.

Side 2 is where MORE SPECIALS really hits home. Latin American lounge meets DUB on the staggering spaghetti-western sound of Stereotype/Stereotypes Pt. 2 whilst Holiday Fortnight is a mariachi brass instrumental worthy of a Mexican version of Carry on abroad. The band go all library music and Bontempi organ on the dark lounge of I Can’t Stand It prior to the airport muzak of International Jet Set. Following all that excitement, the album finishes with a laid-back, end of the night, working mens club reprise of Enjoy Yourself (Later Than You Think).

MORE SPECIALS is such an adventurous work featuring an eclectic mix of reggae, lounge, jazz, dub, SKA and Latin American easy listening. Sadly, it probably marked the beginning of the end for the group as Jerry Dammers’ quest (and drive) to deliver an idiosyncratic album that would prove a challenging listening experience somewhat set him apart from the motives of his bandmates.

MORE SPECIALS is one of the few albums I own on vinyl, cassette and CD. I adore it.